Limited and conditioned by the  21st century attitude to life, the evaluation and definition of intelligence are deeply bound up with the computational powers of the human brain.

The self-awareness gap
There is a massive, gaping ‘awareness abyss’ present in this way of approaching the evaluation of intelligence, giving birth to bizarre ideas, such as unless the human brain gets overlaid in the future with implants that would help its natural neural networks connect with AI neural networks, the human is doomed to “become an inferior being, a pet of modern technology”.

Cutting straight to the chase, in respect to the human spiritual pedigree, this way of thinking reveals an alarming, unbelievable ignorance of the true scope of the natural human capacity and what it is made to be and do.

The brain is of course a critical element in the equation of consciousness, awareness and thinking capabilities. But there is so much more to it than just the brain.

Intelligence exists in a universal gradient
The human is a spiritual being, not a walking brain, which is what the 21st century will have it be. By design, the human is made to live and evolve by the integration of inner lives that anchor an astounding range of dimensions and capabilities: As you read this, you (may) process the content with a colourful blend of inner resources: The mind, the brain and sensory perception, the spirit, the soul, the mental lance, the lower and higher emotions, the instincts and intuition, the breath-taking range of feeling lives that range from the tangible to the intangible, the astounding natural sensitivity, the imagination, the robotic parts…  Well, at least potentially, as unfortunately some of these faculties exist in a muted state in too many of us. With the sum of the whole vastly greater than that of the individual parts.

Each inner life and faculty has their own attending nature and quality of power and associated intelligence, some local, some universal. One can be a 21st century star in terms of one’s brain power and technological accomplishments that in reality may have little consequence in the bigger picture of life and existence. What do you think the universe thinks about the pollution caused by modern high-tech, including ‘green tech’? 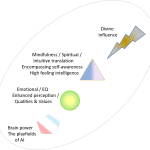 Ask one of the big brain gurus what they know about the human spirit, which is a real and present entity existing at the very core of living. Not what they think – what they know to be fact. And listen carefully – with your spiritual instincts.

Before we move to Mars…
So now we need to move to Mars for humanity to survive itself. Perhaps someone may wish to first find out why the human is on earth in the first place before deciding to change what may be a deep and profound reason, into a new human generated agenda?

Great for business
Is all of this good for business..? Well, besides being good for life, it is very good for business because the very core of business is the betterment of the human condition by the creation of service industries that are ultimately designed to promote human well-being, quality of life, growth and evolution. Or am I missing anything? And you do not achieve this by turning human beings into cyborgs.

The pitfalls of success
Certain forms of success creates role models that combine in buffling ways operational and innovative brilliance with unfortunate ignorance regarding human destiny.

Before letting a clever mind turn you into a deranged human cyborg bear in mind that with all due respect to their great accomplishments, that next to that you are witnessing the mentations of a disconnected human in the spiritual sense – at least at the time that they float these silly ideas.

The Fulcrum is a free offering. Backed up by many years of groundbreaking research, each issue can take several weeks to mature and is carefully crafted to provide access in concise form to uncommon, actionable insights. If you feel moved to, you are invited to make a small contribution as a mark of value. The entire proceeds are donated to a good cause.